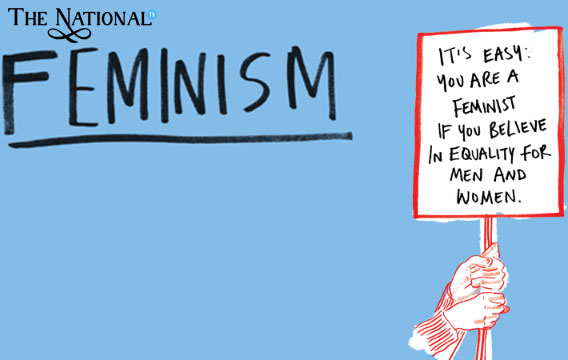 Feminism is a word that is for the upliftment of the weaker or suppressed section of women or girls. This word is often misunderstood, mistaken, and even misinterpreted for a lot of times, by a lot of people. We often see people talking about fake feminism or pseudo feminism, this term has a meaning to them and it's true that such people also exist but on the other hand, it puts dirt on the word feminism along with it. It is sad but I have alot of times myself witnessed people using the word feminism as something if it's lousy or a slang. There are different aspects to it and I have jotted down some points which need some consideration. First and very important, that the word feminism is misused by a lot of women in our society and it's true.

The privileges given to the feminine section of the society are manhandled by a lot of girls or women around the world. A survey tells us that 53.3% reported rape allegations filed between April 2013 to July 2014 by women were false. It's displeasing as well as provoking, but those particular group or clan of people needs to be eradicated and not the women who actually needs to come out and speak up their problems. It is not at all fair to question whatever rights women enjoy nowadays after a tough struggle for it? Equal rights or say equity, which some women still are not aware of what it stands for is the true essence of feminism. Let's put it this way, when a man misuses the physical strength he has to suppress people around him, not specifically women, anyone around him.

That makes him a bad person, not the whole community, just like some women who misuse the leverages given to the feminine section of the society do not make the cause of feminism wrong. In a country like India, where most of us have witnessed women going through different kinds of mess in their lives, be it harassment, violence, eve-teasing, rapes, honor killing, and whatnot, feminism should not be something which overpowers the other gender but something which uses its full potential to bring needy women out there and get them a better life. I do agree with the fact that there are people who are misusing the term, but blaming the concept which has a serious cause, because of some pea-brained clan, is not justified. Feminism for me is having equal rights as men have, be it in any aspect.

Men also have their share of problems and this is undeniable, but considering that a reason to hate feminism is baseless. Each person has their share of problems but some of them are really inhuman and demonic. Those issues with women are very common and I myself have witnessed it every next door. Just like not all men can be generalized not all women who support feminism are putting a tick in the brackets of women who are misusing it. Second, living in a society where women have fought a long battle for their identity in the male dominant society, it is ridiculous to deny the fact that feminism is for a good cause when used properly. There are subjects floating on the internet and social media platforms like men also have their share of problems say they also leave their families and homes to earn or to study, this might also be true to some extent but again even if a girl leaves her house for studies, she might come back to her parents anytime she wants. But after she gets married, the priority obviously changes, and her in-laws or her husband start carrying the baggage of expectations of having kids, taking care of the house, etc.

Now when a woman has her share of responsibilities, she hardly has time to think of her own self or her own house. It's is very normal in our country to hear that when a girl leaves her house, it's her husband's house which is her own. Does this happen to the men too? I firmly and totally believe in the constitution of marriage but only when it is not baggage on any one person, be it male or female. Each one of us knows, what women have been through and still some of the girls or women are on the same boat but also things are eventually getting better. Charity begins at home, by this, I meant to say is that until and unless "we" start respecting the very cause of this movement or word feminism we can't tell the world to be a better place for women or girls. This is to eradicate the daily struggles of unfamiliar feminine sections. Let's work to give them a lesson for misusing the leverages, and not misguiding the people just with a particular word. Let's be responsible and respectful to the people who need this term and the preferences accordingly.