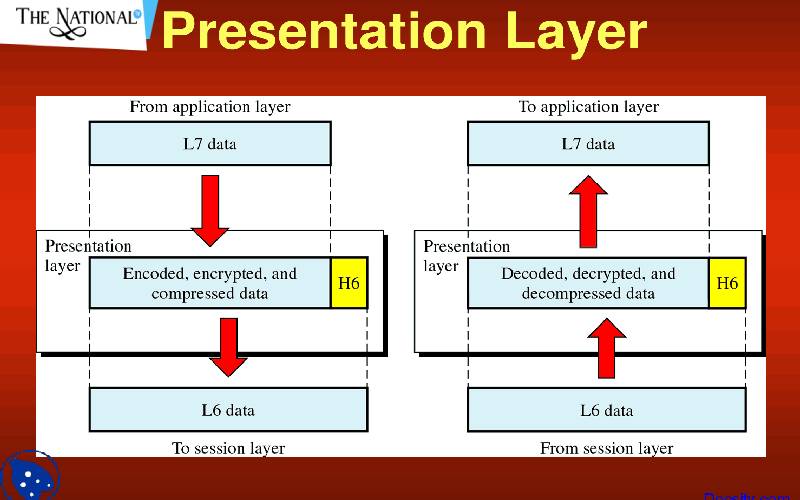 Also known by other names such as Data Presentation Layer, Data Provisional Layer, and Syntax Layer, the Presentation Layer, as it is most famously known as is the sixth layer or Layer 6 of the Open Systems Interconnection (OSI) model. The main function of the layer is to give the system-dependent presentation of data an independent form so the data can be exchanged between two entirely different systems. To give it a simpler term, this layer works as a data translator for a network. Just like two persons speaking two different languages need a translator in order for them to interact with each other, OSI model needs presentation layer to keep its’ functionality while establishing a connection or session between two different systems on common ground.

The common example of this is the conversion of Extended Binary Coded Decimal Interchange Code (EBCDIC) text computer file to the American Standard Code for Information Interchange (ASCII). Working alongside Session Layer and Application Layer which are located above and below it, the session layer is included in the category of the upper layers in the OSI Model with both these other layers. These three upper Layers are responsible for the communication of applications between hosts and have nothing to do with networking and networking addresses.

Functionality and the services:

1. In the process of translating, the codes received; their numbers and characters are converted into the bitstream, which simply means that the data is arranged in a binary form. Only after this conversion could there be initiated a process of data transmission.

2. Decoding and converting is not enough, reducing the bandwidth of the data is also important and it is done by the process of data compression. In this process, the bits of data is reduced before it can be made ready for the transmission.

Although, it may not be seen as a significant process in another kind of media but it is vital for multimedia such as audio, video, and texts. ASCII and EBCDIC mentioned above are the formats used for the conversion of data for the transmission of the texts, Joint Photographic Experts Group (JPEG, named after the committee that created this standard), Graphics Interchange Format (GIF) and Tagged Image File Format (TIFF) for the images and Moving Pictures Expert Group (MPEG, origin of the name of this format is same as the JPEG format), Musical Instrument Digital Interface (MIDI) and QuickTime for the videos. Some of the presentation layer protocols are the Apple Filing Protocol (AFP) and Lightweight Presentation Protocol (LPP).