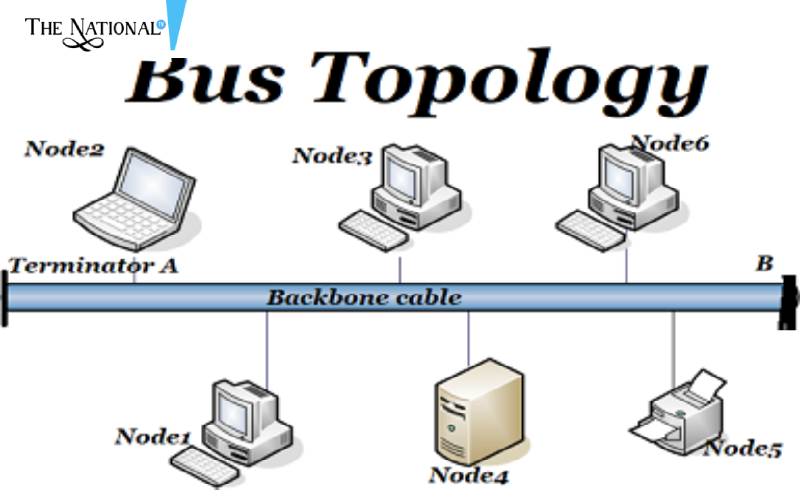 In the Bus Network Topology, the nodes are connected to a common communication channel, this channel is usually a half-duplex and this half duplex is what is referred to as the Bus in the structure. To simplify the term, it is sometimes also referred to as the line topology as it is easily understood by those unfamiliar with the networking terms in general. This topology is specially designed for the Local Area Networks (LANs) and the cable connecting all the devices is called the backbone, as it indicates that it is the most vital part of the structure and breaking of it means the structure will fail. Through this backbone, the signal is sent in and it travels to find the device it was sent for.

Two terminals at the ends make sure the signal does not keep running back and forth in the backbone by weakening it.

1. Given how simple it’s structure is and only one additional cable (other the cables and wires required in the other connected devices) is needed, it is very easy to install with no wastage of time and same goes for the maintenance.

2. Points are given above also makes it cheaper than the other alternatives.

3. For a small network, it works effectively.

4. If one device fails In the network structure, it still works given that the entire structure depends on the backbone mainly.

1. Too much reliability on the backbone. In case the cable connecting the devices break down, the whole system will breakdown.

2. There are no restrictions on the flow of the signals. Meaning; there’s no way of controlling the collisions that usually occurs in the network and a large amount of data packets are lost.

3. Without terminators at both ends of the cable, it is useless.

4. The functionality of it makes the troubleshooting really difficult.

5. Though it is an advantage of it to add more devices after setting up the network architecture but as the number of devices increases, its' effectiveness decreases and maintenance costs may also rise with this.

6. The single cable used to connect all the devices also makes it less and less suitable for heavy traffic networks.

7. If the security is breached, data of all devices can be compromised. Some of the examples of the Bus Topology are Ethernet and Local Talk. While the Ethernet is a cheaper alternative for Local Area Networks (LANs), Local Talk was invented by Apple Computer Corporation for its' computers.