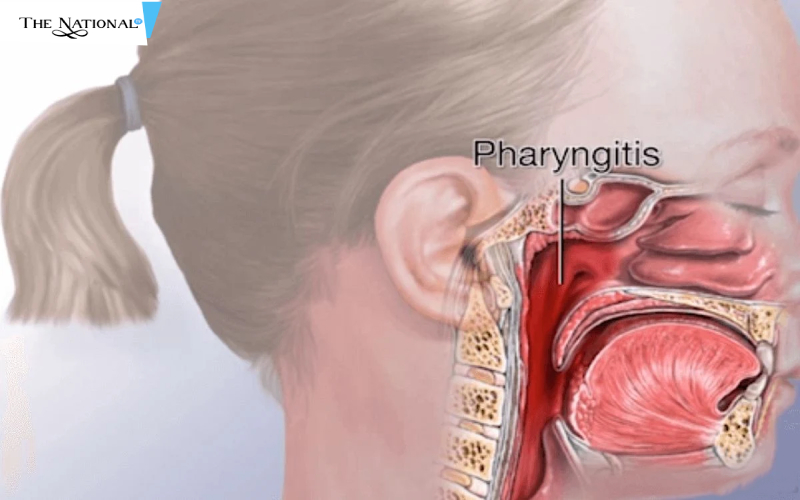 Pharyngitis is an inflammation of the pharynx, which is in the back of the throat. It’s most often referred to simply as “sore throat.” Pharyngitis can also cause scratchiness in the throat and difficulty swallowing.

Pharyngitis can involve some or all of these parts of the throat:

The most common cause of sore throat is infection with bacteria or a virus. Because infection of the pharynx almost always involves the tonsils, tonsillitis (inflammation of the tonsils) was once a common name for infectious pharyngitis.

In regions that have warm summers and cool winters, viral pharyngitis typically peaks during the winter and early spring. This is a time when people are more likely to gather in poorly ventilated rooms. The viruses that cause pharyngitis spread easily. The viruses can spread through the air by hanging on to droplets from coughs and sneezes. They stick to unwashed hands that have been exposed to fluids from a sick person's nose or mouth.

There are numerous viral and bacterial agents that can cause pharyngitis. They include:

In cases of infectious pharyngitis that are not viral, the cause is almost always a bacterium — usually a group A beta-hemolytic Streptococcus, which causes what is commonly called strep throat. Like viral pharyngitis, strep throat can spread quickly and easily within a community, especially during late winter and early spring.

Unlike most forms of viral pharyngitis, however, untreated strep throat can lead to serious complications, such as glomerulonephritis (a kidney disorder) and rheumatic fever (a potentially serious illness that can damage heart valves). A strep infection also has the potential to spread within the body, causing pockets of pus (abscesses) in the tonsils and in the soft tissue around the throat.

The incubation period is typically two to five days. Symptoms that accompany pharyngitis vary depending on the underlying condition.

-  In addition to a sore, dry, or scratchy throat, a cold or flu may cause:

-  In addition to a sore throat, the symptoms of mononucleosis include:

-  Strep throat, another type of pharyngitis, can also cause:

The common cold usually lasts less than 10 days. Symptoms, including fever, may peak around three to five days. If pharyngitis is associated with a cold virus, you can expect your symptoms to last this duration of time.