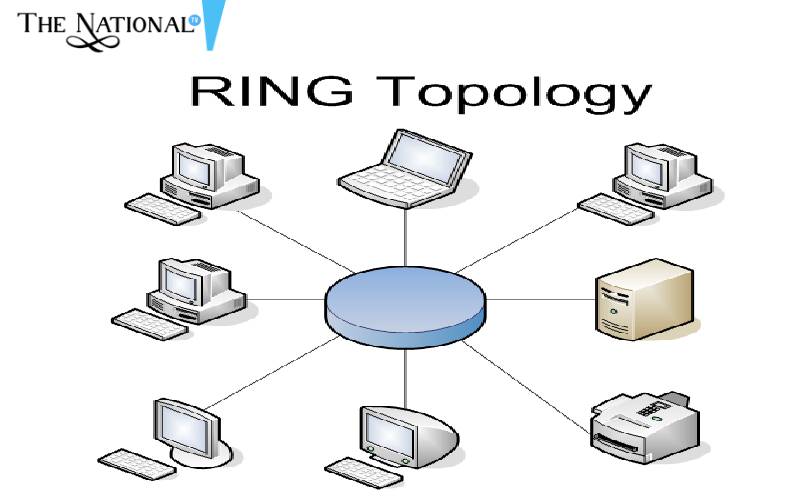 Ring Topology is basically a circle of connected devices where one node is connected to two nodes, one on the left and one on the right, making a ring consisting of at least 4 computers. One device sends the data in one direction and if it is addressed to the next computer, it is received by it. Otherwise, data passed forward until it reaches its' destination.

A unidirectional network can either be clockwise or anti-clockwise. It holds the maximum possibility of a disruption in the system because of the failure of even a single link because it has no alternative path to forward the data ahead. There’s a distinct term in Ring Topology which is named Token Passing. This token is the companion of data in the journey from one computer to another. Their journey together starts from the source computer. The circulation of the token is a permit to indicate to the receiving node that the data that has to be released in the network should be sent forth.

The node obliges if it has some data to be released if not, the token is passed on to the next node in line. Because of its' active system, the ring topology is also called active topology.

1. Ring Topology is capable of taking heavy loads and the process of token passing ensures that only the nodes that have the token can transmit data which controls the traffic in the network and prevents it from getting overwhelmed or possibly colliding.

2. Because of the simple functionality and not so complicated structure, Ring Topology is pocket friendly and cheaper to maintain.

3. To check the connectivity between the stations, no server is necessary.

5. All the computers in this network has an equal right to access resources.

1. In case of a unidirectional network, a token will have to pass through all the nodes which makes it a very long process considering a ring topology can consist of hundreds of nodes.

2. It is not an easy process to add or remove nodes from the ring network once the network has been set up. The installation of the network may be easy but updates in the structure is a whole different story. 3. A ring network is slower than Ethernet.