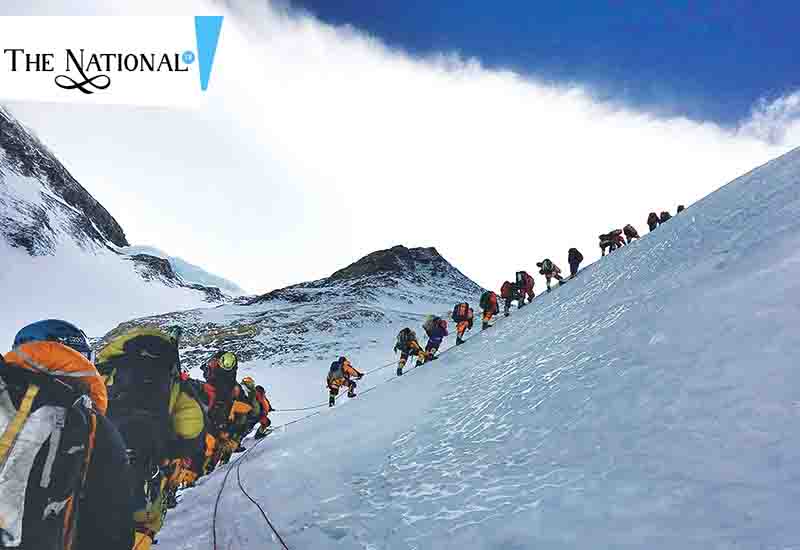 Mount Everest climbing season started. The much-anticipated 2019 spring Mount Everest climbing season officially began on Tuesday with a team of eight high-altitude Nepalese climbing guides reaching the summit.The experienced climbing guides prepare the 8,848-metre peak for the hundreds of climbers who will follow in the coming weeks. The  Everest base camp that eight rope fixing guides reached the top of the Everest on Tuesday to prepare safe path for the climbers by fixing ropes and ladders from Camp II to the summit of the Everest. Hundreds of climbers have been waiting for the route to Everest's summit to open."Around 20 climbers have lined up to head for the summit on Wednesday night".

This season, Nepal's Tourism Department that issues climbing permits, has cleared a record 378 fee-paying climbers to mount their bid on the world's tallest peak.With each climber hiring at least one local high-altitude climbing guide, the total number of individuals on the mountain may reach 1,000 this season, said Tourism Department spokesman Surendra Thapa.Earlier, according to the department, the highest numbers of climbing permits issued on Everest were 371 in 2017. Last year, climbing permits were issued for 349 fee-paying climbers.

There were 514 high-altitude climbing guides, who are not required to pay climbing fee, assisting the climbers last year. Foreigners pay $11,000 to obtain the climbing permit and spend between $40,000 and $90,000 to climb the Everest.