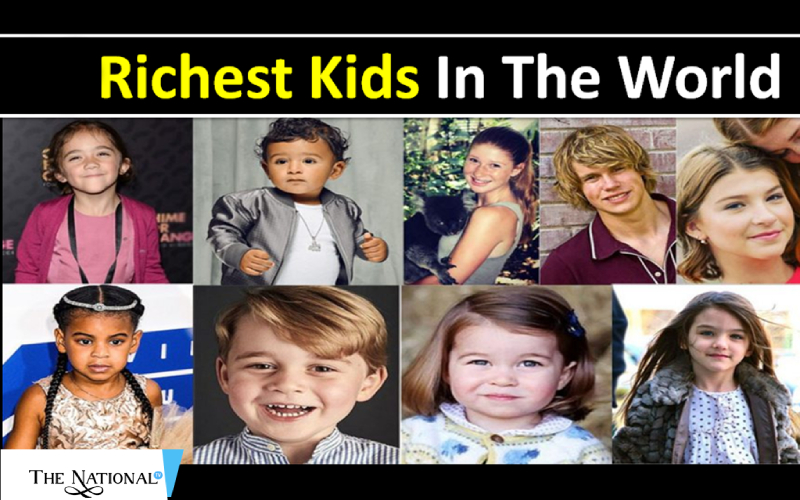 Sons and daughters of the richest people would easily qualify as the richest kids in the world owing to their right to inheritance. However, there are many kids who have earned their fortunes through their own unique ideas and hard work. These kids attend a school like all other kids, but outside of it, they are working to make a difference to this world and the people around them. To know them better, here’s a quick look at the top 5 richest millionaire kids in the world.

Mikaila Ulmer – An American entrepreneur, Mikaila Ulmer has made her fortune selling lemonade. She used her great grandmother’s 1940s recipe to create the lemonade that has special ingredients like flaxseed and honey. Starting with a local Pizza store, Ulmer’s special honey lemonade is now sold across more than 1500 stores. Her wealth is estimated to be around USD 5 million.

Alina Morse – The youngest individual to be featured on the cover of Entrepreneur Magazine, Alina Morse is the founder of Zolli Candy, a sugar-free range of lollipops and candies. Alina wanted a way to enjoy her favorite lollipop without the risk of tooth decay, which eventually led to the idea of launching sugar-free lollipops. Alina currently serves as the CEO of Zolli Candy and also attends the high school. Her wealth is estimated to be around USD 6 million.

JoJo Siwa – After her debut in US reality TV show Dance Moms, JoJo Siwa went on to take up various roles such as an actress, singer, dancer, and YouTube personality. Her YouTube channel currently has more than 11 million subscribers. Siwa has a contract with Nickelodeon, wherein she stars in various TV specials. As per estimates, her wealth is around USD 10 million.

Danielle Bregoli – Although a controversial celebrity who has already served probation time, Danielle Bregoli still enjoys tons of fan following. She comes across as a multi-faceted individual, having excelled in multiple domains such as rap artist, internet personality, and songwriter. She is the youngest female rapper to make it to the Billboard Hot 100 chart in 2017. Working under the nickname ‘Bhad Bhabie’ (bad baby), Danielle Bregoli’s wealth is estimated to be in excess of USD 10 million.

Isabel and Caroline Bercaw – While most of us were buying our bath bombs from the stores and having lots of fun with them, sisters Isabel and Caroline Bercaw decided to do things a bit differently. They created their own bath bombs and placed surprise toys on the inside for added fun. As their new creation emerged as bestseller at a local art show, the sisters realized that their idea can be launched on a bigger scale. That is exactly what they did and now their ‘Da Bomb Bath Fizzers’ is a multi-million dollar business. Estimated wealth is more than USD 20 million each for both sisters.