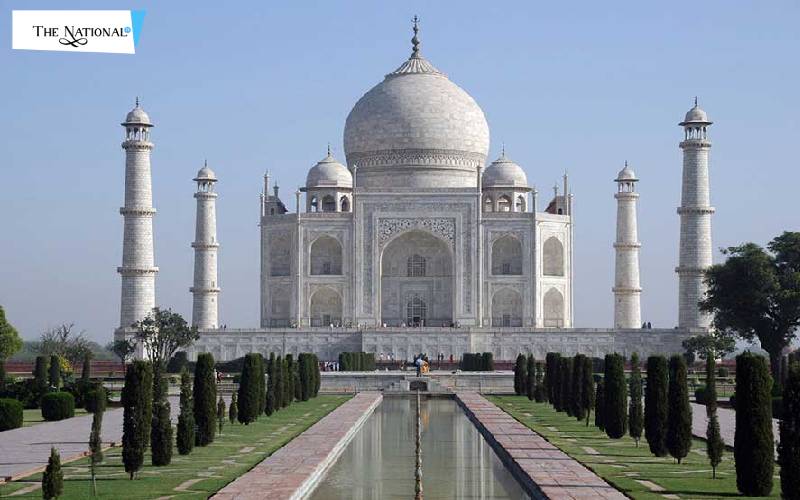 Taj Mahal, also spelled Tadj Mahall, mausoleum complex in Agra, western Uttar Pradesh state, northern India. It is situated in the eastern part of the city on the southern (right) bank of the Yamuna(Jumna) river. Agra Fort (Red Fort), also on the right bank of the Yamuna, is about 1 mile (1.6 km) west of the Taj Mahal.

In its harmonious proportions and its fluid incorporation of decorative elements, the Taj Mahal is distinguished as the finest example of Mughal architecture, a blend of Indian, Persian, and Islamic styles. One of the most beautiful structural compositions in the world, the Taj Mahal is also one of the world’s most iconic monuments, visited by millions of tourists each year. The complex was designated a UNESCO World Heritage site in 1983.

The Taj Mahal was built by the Mughal emperor Shah Jahan (reigned 1628–58) to immortalize his wife Mumtaz Mahal (“Chosen One of the Palace”). She died in childbirth in 1631, after having been the emperor’s inseparable companion since their marriage in 1612. The plans for the complex have been attributed to various architects of the period, though the chief architect was probably Ustad Ahmed Lahawrī, an Indian of Persian descent.

The five principal elements of the complex—main gateway, garden,mosque , jawāb (literally “answer”; a building mirroring the mosque), and mausoleum (including its four minarets)—were conceived and designed as a unified entity according to the tenets of Mughal building practice, which allowed no subsequent addition or alteration. Building commenced about 1632. More than 20,000 workers were employed from India, Persia, the Ottoman Empire, and Europe to complete the mausoleum itself by about 1638–39; the adjunct buildings were finished by 1643, and decoration work continued until at least 1647. In total, construction of the 42-acre (17-hectare) complex spanned 22 years.

A tradition relates that Shah Jahān originally intended to build another mausoleum across the river to house his own remains. That structure was to have been constructed of black marble, and it was to have been connected by a bridge to the Taj Mahal. He was deposed in 1658 by his son Aurangzeb, however, and was imprisoned for the rest of his life in Agra Fort.

Over the centuries the Taj Mahal has been subject to neglect and decay. A major restoration was carried out at the beginning of the 20th century under the direction of Lord Curzon, then the British viceroy of India. More recently, air pollution caused by emissions from foundries and other nearby factories and exhaust from motor vehicles has damaged the mausoleum, notably its marble facade.

A number of measures have been taken to reduce the threat to the monument, among them the closing of some foundries and the installation of pollution-control equipment at others, the creation of a parkland buffer zone around the complex, and the banning of nearby vehicular traffic. A restoration and research program for the Taj Mahal was initiated in 1998. Progress in improving environmental conditions around the monument has been slow, however.

From time to time the Taj Mahal has been subject to India’s political dynamics. Night viewing was banned there between 1984 and 2004 because it was feared that the monument would be a target of Sikh militants. In addition, it increasingly has come to be seen as an Indian cultural symbol. Some Hindu nationalist groups have attempted to diminish the importance of the Muslim influence in accounting for the origins and design of the Taj Mahal.