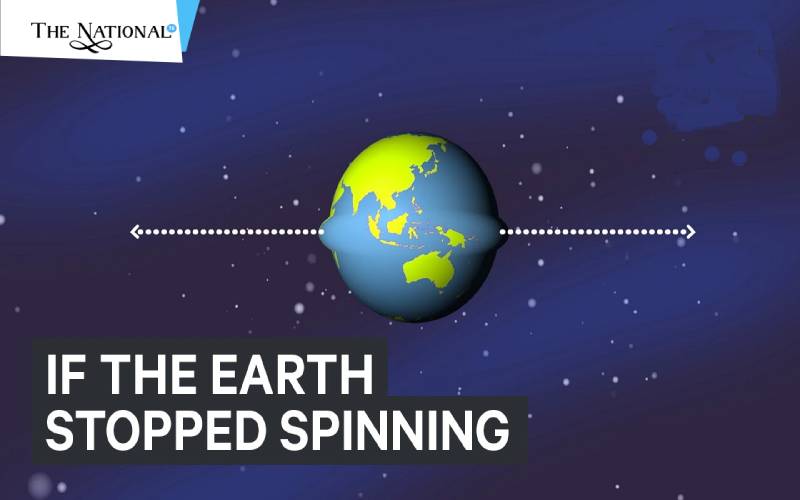 1. All objects would fly east at high speed with their own momentum-We don’t notice the huge speed at which our earth is spinning. But, if it is stopped NASA says everything on its surface would be torn off from the ground and fly east, eventually falling back down, and at the equator, the speed would be the greatest about 1000 MPH, and closer to the poles it reaches near 800 MPH.

2. Enormous tidal waves would occur-The power of the momentum would make the water in oceans and seas move to form extremely powerful tsunamis, they would move east and clean the coastal cities off the surface of the earth.

3. A powerful wind would rise- The atmosphere will continue moving and its momentum would make it rotate around the planet probably several times, the starting win speed would be more enormous more than 1100 MPH. If possible earth would lose part of its atmosphere while this happens.

4. All water on earth would collect in two oceans and a new continent would formed- Water gathers at the equator now due to centrifugal force. A sudden stop in earth’s spinning will make the landmasses and water redistribute themselves to form two great oceans on both poles. The land on the equator would be raised and create a giant new continent covering the whole equator throughout the planet.

6. Earth would transform from a Geoid into a sphere- The Geoid shape of the earth is due to its spinning motion, it’s a bit flattened on the poles and a little bulging at the equator. If the planet stops its shape becomes more spherical.

7. One hemisphere would become as hot as a dessert and the other be as cold as arctic- If earth doesn’t spin, only half of it would be heated this would make it scorching hot and brightly look, with the highest temperatures at the equator. The second hemisphere would become a kingdom of eternal night and arctic cold.NASA has another version earth would stop turning altogether and there will be a six month day and a six month night.

10. The moon would eventually fall onto earth- Prof.Vaughan Pratt at Stanford University says the moon would gradually slow down too and its distance from earth reduces, In the time it would probably fall onto our planet.

In fact, the earth is slowing down at starting, it spun much faster: A day lasted only 6 hours. NASA calculated that day length increases by 2.3 milliseconds every 100 years. After billions of years, Days would become several times longer. And then our planet probably stops completely.