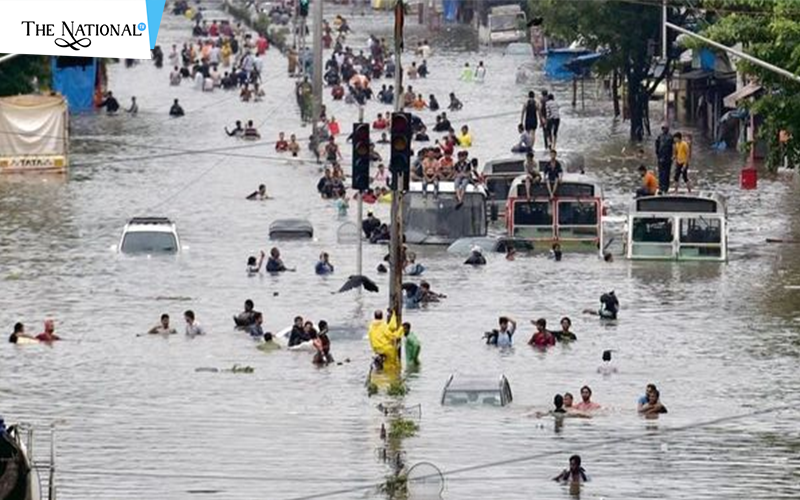 In 2050, The one thing that governments around the world can never say is that they have not been warned. Ever since the game-changing testimony of former US space agency NASA scientist James Hansen to the US Senate in 1988, warnings about the nature, extent and perils of climate change have been repeatedly highlighted. Moreover, as climate change science has evolved, the warnings have become more specific, as has the advice on mitigation and adaptation.

The latest in this long line of warnings was published on 29 October, and it was, as usual, dire. We have severely underestimated just how much global coastlines are in danger from rising sea levels, write Scott A. Kulp and Benjamin H. Strauss in the paper New Elevation Data Triple Estimates Of Global Vulnerability To Sea-level Rise And Coastal Flooding, published in the journal Nature Communications. Kulp is a computational scientist and Strauss is the head of Climate Central, an independent research organization based in Princeton, New Jersey. According to the paper, large parts of the world’s low-lying coastlines will be at significant risk of widespread annual flooding within the next 30 years, to an extent that we can’t really even imagine right now.

Take India, for example: Even by moderate estimates, by 2050, 36 million people (going by the 2010 census) living in coastal areas will be at risk from annual flooding due to sea-level rise; the previous estimate was five million. By the end of the century, these areas will be permanently underwater, and the number of affected people would go up to 44 million; much of Mumbai and Kolkata, as well as Odisha’s coast, coastal Gujarat around Surat and the Sunderbans in Bengal will be badly affected.

The reason for this worse-than-imagined scenario is based on the computational model developed by Kulp and Strauss. Currently, coastal elevation data is primarily measured using NASA’s Shuttle Radar Topography Mission (SRTM). The authors found the data to be unreliable, in that SRTM was seen to overestimate global coastal elevations by as much as 6ft. This went up to 8-15ft in some places around the world. To negate the mistakes in estimates, they devised the CoastalDEM (digital elevation model), using machine learning for truer coastal elevations. The results are astonishing.

Imagine a Mumbai that, by 2050, will be subjected to severe annual floods, reducing the city and its immediate neighborhoods to the islands they once were. According to interactive maps on the Climate Central website, a future scenario of limited mitigation and no adaptation would turn areas like Colaba, Malabar Hill, Bandra West and the Sanjay Gandhi National Park into isolated patches rising above the flood. Much of the city, which is below the tideline, will be overwhelmed, all the way up past Vasai and NASA Sopara to the north, and Navi Mumbai and Dombivili to the east. Sensitive infrastructure, like the reactors of the Bhabha Atomic Centre, would be at risk.

Similarly, the low-lying area separating the Sunderbans from Kolkata, as well as the city itself, all the way up to its northern suburbs, faces severe flooding risks, which are only going to get worse without adequate mitigation and defenses. Anjal Prakash, associate professor at The Energy and Resources Institute (Teri) School of Advanced Studies, believes the paper’s findings reaffirm the Intergovernmental Panel on Climate Change special report on ocean and the cryosphere. “The sea level will continue to rise. It is projected to reach around 30-60 cm by 2100 even if the greenhouse gas emissions are sharply reduced and global warming is limited to well below 2 degrees Celsius. This study uses a newer methodology and shows that much higher population is at risk," he says.

Even accounting for margins of error in the new data set generated in this paper, Roxy Mathew Koll, a climate scientist at the Indian Institute of Tropical Meteorology (IITM) in Pune, believes that it should be more accurate than the earlier data. The risk to Mumbai, for instance, is very real. “Over the Indian Ocean, the current rate of sea-level rise is 5-6 cm per decade. At this rate, densely populated areas of low-lying cities like Mumbai would be at a higher risk," he says.

Kulp and Strauss state that their estimates do not take into consideration countries acting on climate change warnings, which might help avert the worst outcomes. For Prakash, this is of great importance. “The policy response would be to merge urban planning with environmental resource planning. At the moment, we do not have many good examples of this," he says. Cities like Mumbai, he says, have to protect their natural defenses like mangrove forests. “Kolkata has many urban water bodies which were interlinked and used to serve as a sponge for the city when there is excess rainfall and keep the water table up to keep salinity ingress at bay," he adds.

There have been adequate warnings and more will continue to pour in as climate science data and analysis gets more refined. Right now, it’s up to governments to do the right thing.