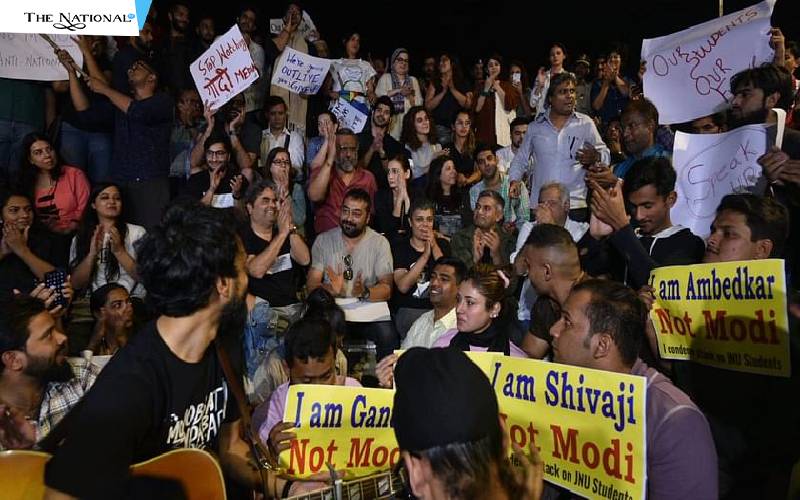 The whole country broke out to support and stand in solidarity with JNU students as they were brutally attacked by the goons funded by BJP and the RSS. The students sustained serious injuries and were later hospitalized. Group of 50 masked men and women attacked students inside the hostel and the campus, completely making a ruckus and chanting racial slurs and abuses.

Peaceful protests took place in Mumbai’s Gateway which had attendees from Bollywood including director Anurag Kashyap, Vishal Bharadwaj, Zoya Akhtar, Gauhar Khan, Farhan Akhtar, etc to condemn such violence against students. Many believe the suspected attack carried by the political party is being done in order to fuel fear among the citizens of the country to inculcate CAA and CAB.

Bollywood actors sent out Tweet posts and support to the students of JNU. Columnist and author Twinkle Khanna posted a picture of Mumbai Mirror’s headline and wrote “India, where cows seem to receive more protection than students, is also a country that now refuses to be cowed down. You can’t oppress people with violence-there will be more protests, more strikes, more people on the street. This headline says it all”.

Alia Bhatt was seen retweeting her post. Actress Taapsee Pannu wrote on Twitter “Today at 8 pm Carter Road, Bandra. Coz with great power comes greater responsibility and I don’t want to shy away from it. ‪#JNU‬ you have our love and support”, Jaaved Jaaferi wrote “What we need to set up are a force, a private force that will essentially find anti-national elements, in beer halls, at universities, at jobs, and take care of them. There's no need for the local police to get involved. Of course, we'll go by list.” - Heinrich Himmler, 1934 Actor Anil Kapoor in an interview stated that he condemns such acts, violence is not the solution.