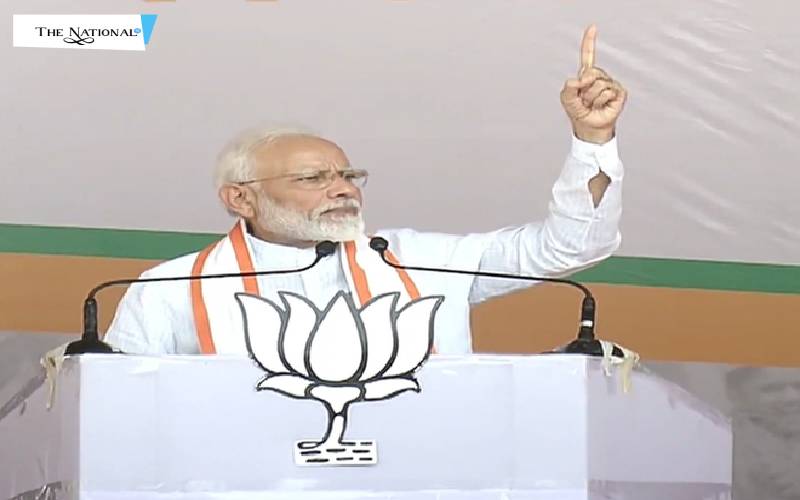 Prime Minister Narendra Modi on Sunday dared the opposition to restore Article 370 in Jammu and Kashmir. At an election rally in Maharashtra's Jalgaon, he launched a blistering attack on the Congress and the Nationalist Congress Party (NCP) over their stand on Article 370. 'Can these leaders, who're trying to fool the people with their crocodile tears, bring back Article 370 in Kashmir? Will the people of India allow them to? Will the people of India accept it? I challenge the opposition to declare in their manifesto they will bring back Article 370,' Modi said. He insisted that for the BJP, Jammu and Kashmir and Ladakh aren't just a piece of land or territory.

'Jammu and Kashmir and Ladakh aren't just a piece of land for us but is the crown of India. Looking at the security needs, we took the necessary steps. We have also tried our best to ensure normalcy in the area, amidst all the negative powers in and around the area.' He said that the government's decision on August 5 to abrogate Article 370 was a historic one that among other things restored rights of the Valmiki community. Modi's rally came on the birth anniversary of Valmiki - sage, poet and the original author Ramayana 'Valmikis had no rights in Jammu and Kashmir for 70 years because of Article 370.

There was only terrorism and separatism.: Without naming Pakistan, he said a neighboring country was conspiring to create unrest in Jammu and Kashmir and stressed that the government is committed to bringing the situation to normal at the earliest. 'We have taken steps for security. We are working to bring the situation to normal. We won't take four months to normalize the situation that had been so bad for 40 years,' Modi said. He accused the Congress of politicizing the government's decision on Kashmir to reap benefits in the upcoming Maharashtra assembly elections.

'Some parties doing politics over Kashmir even in Maharashtra for votes. Congress and NCP think completely opposite to what the country thinks. They speak the language of a neighboring country and hesitate to stand by the country,' Modi said. The Prime Minister appealed to the people of Maharashtra to once again vote for the Devendra Fadnavis government in the state in the upcoming assembly elections.

'Four months ago, you voted for a new India. The world is watching India's new 'josh' (enthusiasm). Your vote embellished India's democracy. New India's josh not due to Modi but your one vote,' he said. Voting for the Maharashtra state polls will be held on October 21. The counting of votes will take place on October 24.