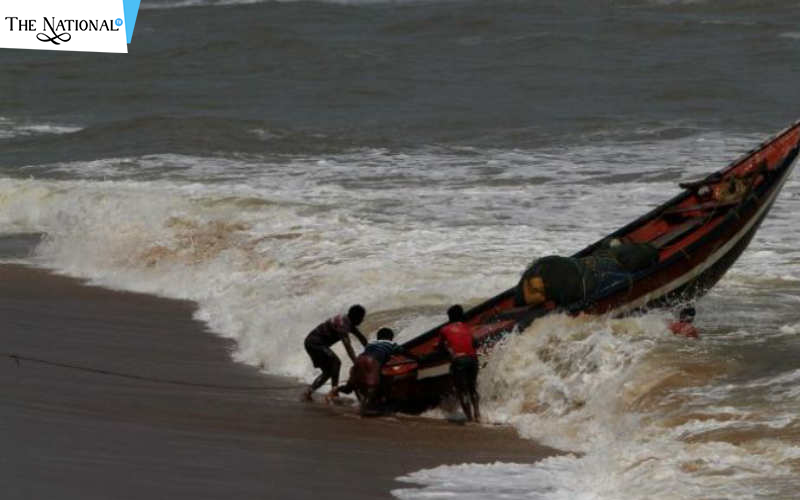 The deep depression lay centered over east-central and adjacent southeast Bay of Bengal, about 810 km south-southeast of Paradip in Odisha and 920 km south-southeast of Sagar Islands in West Bengal The system was around 960 km south-southwest of Khepupara in Bangladesh, said Director of Bhubaneswar Meteorological Centre, HR Biswas. "It is likely to intensify into a cyclonic storm during the next 24 hours and move west-northwestwards for some more time," he said. Thereafter, it is likely to move north-northwestwards, towards West Bengal and adjoining north Odisha and Bangladesh coasts, Biswas said. According to IMD Director General Mrutyunjay Mohapatra, chances of the cyclonic storm hitting the Odisha coast are very low.

The system is being closely monitored to ascertain the exact direction the cyclonic storm will take and possible location of its landfall, he said. With IMD predicting widespread rainfall, Odisha government on Tuesday alerted the administration in several districts asking them to remain prepared. "We have put 15 of the state's 30 districts on alert in view of the possible heavy rain," Special Relief Commissioner (SRC), PK Jena had said. The likelihood of a cyclonic storm in the region comes barely six months after cyclone Fani devastated coastal Odisha on May 3, claiming around 64 lives.

The cyclone warning also comes a fortnight after six people were killed in rains that battered Odisha under the impact of a low-pressure area. Biswas said light to moderate rainfall is likely to lash most places over the north coastal districts of Odisha from November 9 and 10. In West Bengal, light to moderate rainfall at most places and heavy rain at isolated locations might occur over the coastal districts on November 10 and 11, the IMD said. Under its impact, squally winds with 40-50 kmph speed and gusting up to 60 kmph is likely to prevail over northwest Bay of Bengal off Odisha-West Bengal coasts from the evening of November 8, and gradually increase thereafter, it said. Sea condition will be very rough over the east-central Bay of Bengal till Thursday evening and become very high to phenomenal thereafter over central and adjoining northwest Bay of Bengal, it said in a bulletin.

Fishermen have been advised not to venture into the sea along and off Odisha-West Bengal coasts from November 8 onwards, it said. The Odisha districts which were put on alert are Balasore, Bhadrak, Kendrapara, Jagatsinghpur, Ganjam, Puri, Gajapati, Koraput, Rayagada, Nabarangpur, Kalahandi, Kandhamal, Boudh, Nuapada and Malkangiri. The state government has taken all precautionary measures to deal with any situation, the SRC said. The Agriculture Department has also asked farmers to take appropriate safeguards in time to save their crops, harvested paddy, and vegetables.